This entry is going to compose of some of my underground shots I have taken. Now as I have stated in the past, exploring the coal mines is EXTREMELY DANGEROUS and I don't recommend anyone to do so. I do not encourage anyone to do so either. Deadly gases and chances of collapse can injury or kill you if you do so. So just enjoy these photos of the actual places where the coal was extracted from. Don't ask me where these photos were taken because I won't bother to reveal their locations.

These photos are just some of the underground ones I have. In time I may update this entry with more photos. This next photo I'll go into more detail about it.

That last photo is of one of the mines to the Loomis Colliery. This one was blocked off but some time ago, it was discovered that it had opened up a bit so a grate was put in place on it.

The above photo is what many mines look like these days. The purpose of the grates is for the bats that may live the old mines. Speaking of bats: 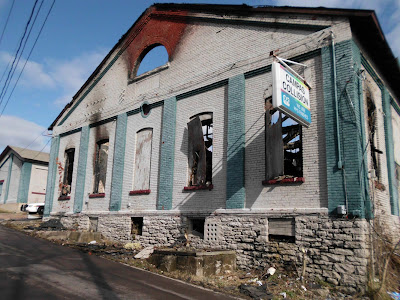 Early morning on February 5th, a fire broke out at Campus Collision which was housed in one of the former Nottingham Colliery buildings. The whole inside is gutted out and the roof is gone. While I was there getting photos of the structure, Plymouth Fire Department were still there investigating the cause of the fire, which is still unknown as I'm doing this entry. Below are several other photos I took of the structure at roughly around 11:00AM. 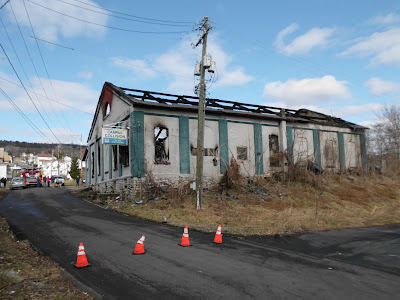 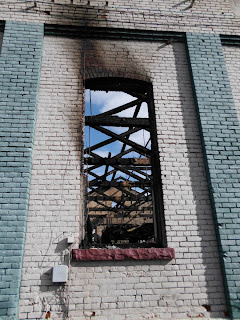 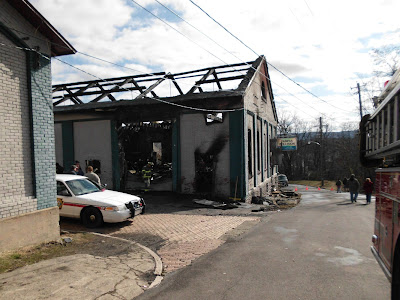 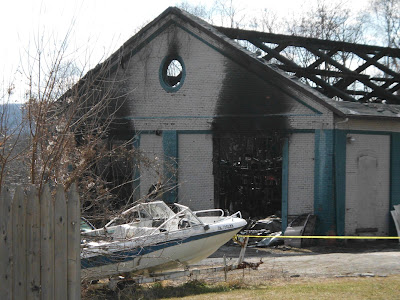 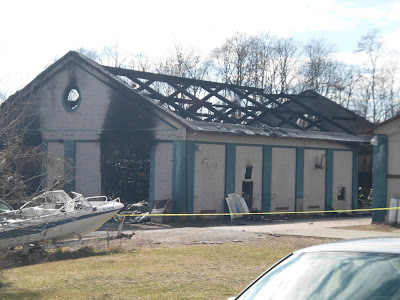 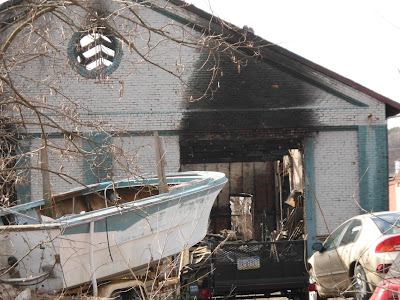 I'm unsure what the fate of this structure will be now since the fire. The building itself looks good but it will need much work to fix it up. Expect more updates about this as time goes on.
These are some more pictures I took on the following day of the structure. 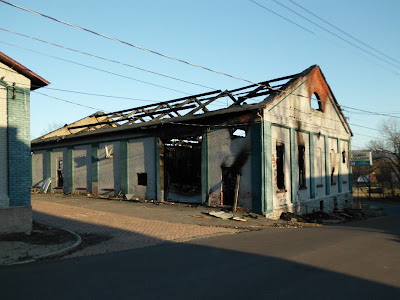 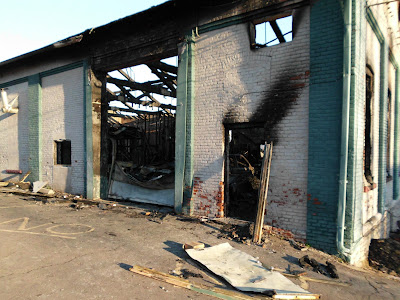 These next shots are looking inside from the garage door. 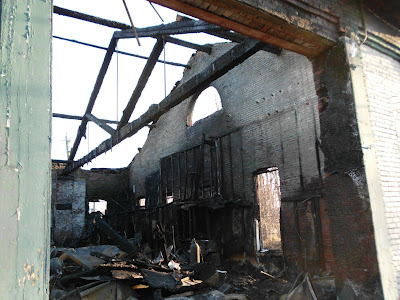 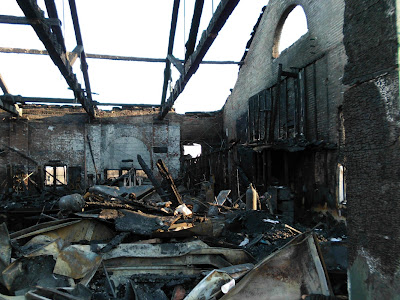 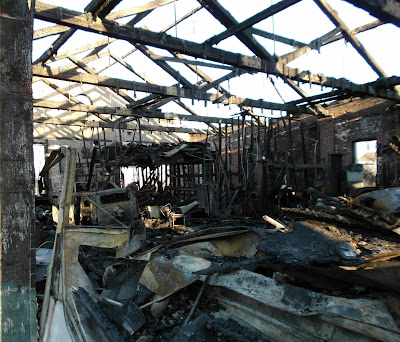 Introducing a New Section to This Page: A Step Away From Coal

A Step Away From Coal will be entries I do on here that aren't related to the collieries or the mines but will cover other abandoned and forgotten places in the area. Those locations will basically be the locations I post photos up on my other Facebook page, The Forgotten Places of NEPA. The next entry on here will be of one of these locations, a location I'm sure many around where I lived have been to, or at least have heard about, before it closed.
Posted by Ed at 20:34 No comments: 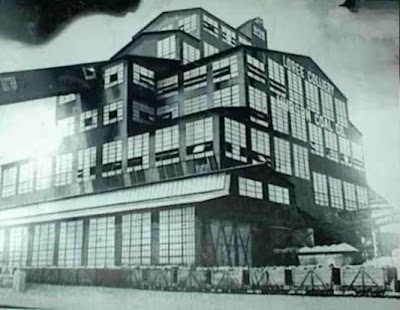 The Loree Colliery was located along Nesbitt Street in Larksville. Today, the large culm piles are the biggest reminder of the colliery. Other items, like the Dorr Thickener tanks, power plant floor and basement, culm screening building, electrical sub-station, an oil and grease storage building, a slope entrance, the capped off No. 2 Shaft, the filled in No. 1 Shaft, a foundation and tunnel I believe to off been the boiler house, and what I believe to be the remains of the wash house. Many smaller items also lay around such as timbers and sheet metal pieces. The Loree was built to replace the old No. 5 that burned down. In 1919, the Loree opened and began operation, it was named after L. F. Loree, the president of the D&H Railroad. The breaker closed sometime in the 1960s but was used as a fine coal recovery plant into the 1970s before being closed for good. In the fall of 1993 the breaker was torn down. Some of the other buildings stood until recently and the No. 2 Shaft was just recently capped off in 2008. .
The above photo was taken from where Pete Broody Tires stands at today. Shawnee Concrete can be seen in the near distances, which they are still in business and in that same location.

The No. 2 Shaft is up on the hill behind Shawnee Concrete. That was capped off in 2008 but before that, it just had some pieces of metal covering it.

This old photo shows a lokie at the site of the Loree with what I believe to be the No. 2 Shaft in view.
The No. 2 Shaft looks different today.
I can understand the reasoning on why it's fence off because these concrete caps have failed in the past. Back near Nesbitt Street is where the power plant once stood.
While walking on the floor of the former power plant, I took notice of several openings filled with bricks. Getting down to get a better look, I found it those are the openings into the basement. I didn't bother going down because it's flooded but I did get this photo.
Just down a little bit is the only portion of the power plant that stands.
Just a little way from the power plant are the remains to another building.
On the area of the structure is a small opening that drops down to the under of the building, where it's like a tunnel.
Up the hill from this is a sheet metal building the screen for coal in the culm banks then sent that coal to the breaker to be processed. 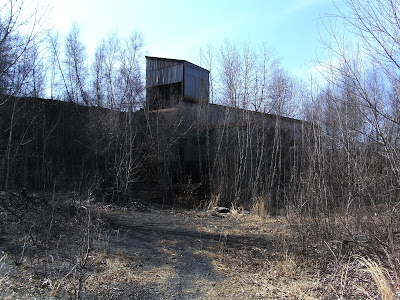 The inside of the building is rather open but had to be because of all the dust that would of been floating around when the screener was on.
The machine that did the screening is located on the second floor.
Right near this building is a solid brick building that was the electrical sub-station.
The inside of it has a small repairing station and most of the electrical panels.
Behind this building is the oil and grease storage building.
The inside of the building doesn't have much except the old storage containers and an old ladder.
The only other building that stands was converted into an auto body shop.
Further down Nesbitt Street are the remains to the Dorr Thickener tanks. When the building to it were torn down, the rubble was just pushed into the small tank. I need to get better photos of the smaller tank so perhaps in an update I'll have them up. These photos are of the larger tank.
These last few pictures are just of other, smaller, items on the lands.
These last to photos are old ones that I just couldn't find a spot anywhere else on here for.
I'd like to thank Steve Kondrad for allowing me to use his photos of the No. 2 Shaft before it got capped and for sending me all of the old photos of the colliery since I couldn't find them anywhere.
Posted by Ed at 02:00 1 comment: